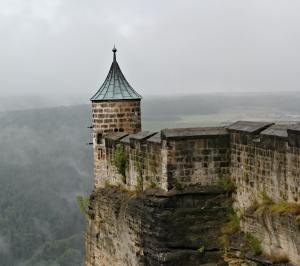 Author Susie Larson says, “The locked gates before you are nothing more than an opportunity for faith.” Do you believe it? King David did.

David was thirty years old when he became king over Israel and Judah. Once all the tribes of Israel recognized David as king, he headed for Jerusalem, or Jebus, as the Jebusites called the city. Side note: When Joshua led the Israelites into Canaan, they never did conquer the city of Jebus. That’s the reason it remained in  the Jebusites’ hands.

When the Jebusites saw David and his men approach their walled city, they told David he would never get in. Nevertheless, David got in. He not only got into the fortress, he conquered the city. He renamed it the City of David; Jerusalem, where he reigned for thirty-three years.

David saw the obstacle in front of him as an opportunity for faith. He trusted the God who delivered him from the paw of the bear and paw of the lion, and might I add, the spear of Saul, to make a way.

How often, I wonder, do we look at the obstacles and see them as an opportunity for our faith to grow? Speaking for myself here, maybe not as often as we would like or as often as we should.

Many times I look at the fortress and don’t notice anything else. I head out to conquer the city and run smack into the wall, and that wall is all I see.

Although David may have thought otherwise, the City of David wasn’t all about him. Jerusalem is where our Lord and Savior was falsely accused, illegally tried, and brutally murdered for a crime he did not commit. Jesus rose triumphantly from the grave in that city. His Spirit was poured out on his disciples in that city fifty days later at Pentecost.

Just as with David, any fortress we might conquer is not all about us. If it is something God calls us to conquer, he’ll provide a way and the power for us to make it so.

So just how did David and his men capture the city of Jebus? David told his men to enter through the water shaft. He used an unconventional method and took the opportunity for faith to overcome the obstacle before him.

What opportunity for faith are you facing? Keep searching for the water shaft.

David then took up residence in the fortress and called it the City of David. He built up the area around it, from the terraces inward. And he became more and more powerful, because the Lord God Almighty was with him. 2 Samuel 5:9-10 (TLB)

You can find my July Inspire a Fire post here. Please stop by and read it.

Please enter your email address on the form located on the right sidebar to sign up to receive posts every Tuesday and Thursday. Thanks!

Photo by Dušan veverkolog on Unsplash

6 thoughts on “Opportunity for Faith”