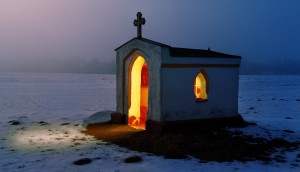 Last month I reviewed God With Us. In that book, several devotions from Augustine of Hippo’s City of God appear. Prior to reading God With Us, I had not read St. Augustine’s work. I found a series of contrasts he listed interesting and worth pondering. Perhaps you will as well.

Are you familiar with St. Augustine’s work? Is there something he wrote you would add to our series of contrasts?

David was looking into the future and speaking of the Messiah’s resurrection. He was saying that God would not leave him among the dead or allow his body to rot in the grave.

“God raised Jesus from the dead, and we are all witnesses of this.  Now he is exalted to the place of highest honor in heaven, at God’s right hand. And the Father, as he had promised, gave him the Holy Spirit to pour out upon us, just as you see and hear today. For David himself never ascended into heaven, yet he said,

‘The Lord said to my Lord, “Sit in the place of honor at my right hand until I humble your enemies, making them a footstool under your feet.”’ Acts 31-35 (NLT)

You can find my February Inspire a Fire post here. Please stop by and read it.

2 thoughts on “A Series of Contrasts”